Last October 24th there was a sociable gathering in café De Basuin in Leeuwarden. As the Danish poet Carsten René Nielsen was staying in Groningen for six weeks to write new material and to translate work by Nyk de Vries, amongst others, RIXT invited him for a performance. Nielsen is a prose poet pur sang, so the evening was centred around that genre. Because of that, our own prose poet Nyk de Vries was invited as well.

The varying occasional formation Reade Runen – consisting of Elmar Kuiper, Cornelis van der Wal, Syds Wiersma and Geart Tigchelaar – which has a connection with Denmark as they were there last April and are busy gathering and translating a collection of Frisian-Danish poetry, performed as well. As said, the composition of the formation varies and Hein Jaap Hilarides replaced Tigchelaar for the evening, as Tigchelaar was hosting the evening.

Hilarides was the first to perform with verses in Biltsk and even a few in English to allay Nielsen. However, it has to be said that Nielsen is learning Dutch and understands a fair amount of the language already.

De Vries was able to showcase his prose poetry, utilising music and images alternately in his performance. Thus, his set had a more multimedia approach. His performance was superb and it added some variety to the evening as well.

Syds Wiersma travelled through Ireland during the summer, so he poured all his experiences and meetings over there into the mould of prose poetry. Full of narrative and with a rich language he took the audience with him on his travels. 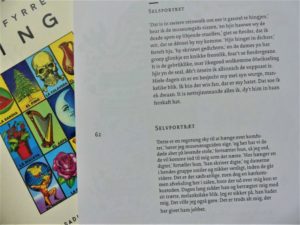 Carsten René Nielsen had made a vibrant selection of his poems from his latest collection Enogfyrre tin (Forty-one things) and Tigchelaar read translations of them in both Dutch and Frisian. Some members of the audience were able to understand Danish, so Nielsen was pleasantly surprised when some laughed along during his original language performance.

After the break it was Elmar Kuiper’s turn who was in high spirits and in-between his poems he told some vivid tales about his expeditions as a young boy with his dad, a cattle photographer.

Next up was return performance by De Vries. He took us along with him to an interview he and others from the Blauwe Fedde literary magazine had had with the Frisian author Rink van der Velde, we sat with him atop a crane in LA, and the next moment in the clubhouse in Harkema. Nielsen added that in his view the Frisian word for clubhouse, ‘kluphûs’, only has a good translation in the Danish ‘forsamlingshus’. According to Nielsen, no other language comes close to the full width of the meaning in Frisian.

Following this, Cornelis van der Wal read four translations of prose poems by Rimbaud, Baudelaire and Revérdy. The last poet is less famous than the others, and Van der Wal had to concede that he himself hadn’t heard of him before either. Van der Wal had translated the poems superbly and the somewhat raw verses accorded well with his own distinctive style of performance.

That the French invented prose poetry can be asserted as fact comfortably. Which was a nice bridge for Nielsen to step in after Tigchelaar asked him to explain to the audience what exactly a prose poem is. It all started in France, but today the genre is mostly practiced in the United States and Canada, not so much in Europe (anymore).

Prose poetry is closely linked to so-called flash fiction. A prose poem often uses narrative as well and is a short form of prose, but it is more poetic in language and more concise. Nielsen would categorise some of the poems in the collections of De Vries as short prose, but Nielsen concludes that the best identifying mark of a prose poem as a prose poem is the author’s own identification of it as such. The covers of De Vries’s collections state that they are prose poems, and thus they are prose poems, according to Nielsen, because this provides a framework for the reader.

No one in the room could add to that, so Tigchelaar thanked the poet collective RIXT and Boeken fan Fryslân in particular for the (financial) support and ended the official proceedings. This allowed everyone in the cosy De Basuin to drink one more with the poets.