The final evening of De Utmolken Toer (The Milked Tour), the poetry tour of RIXT poets Elmar Kuiper and Geart Tigchelaar, will be live-streamed on Saturday 24th of October from De Bres, Ljouwert/Leeuwarden.

Now that the safety regulations has put a hold on large audiences, the poets decided to bring their poetry evening to the public online. The livestream will be organised by creative bureau Hatogkrøller and can be followed on the Youtube channel of Frisian literary magazine Ensafh., the Facebook page of Frisian Poet Pack RIXTand the Facebook page of Ensafh.

Besides performances of Kuiper and Tigchelaar, RIXT poets Cornelis van der Wal and Syds Wiersma will also read their poetry. The music band of Kuiper, Tigers fan Greonterp will perform as well and the evening will be moderated by author, editor and publisher Piter Boersma.

Elmar Kuiper (1969) writes poetry, short proze and theatre. In 2004 he made his debut with Hertbyt. Wite Molke, Swarte Mûle is his ninth volume. His poetry has been nominated for literary prizes and has been translated in several languages.

Geart Tigchelaar (1987) has won the D.A. Tammingapriis for his debut, leech hert yn nij jek (2017). Ommers is his first volume with proze poetry. Prepublications have been bosted on the Instagram-account @om.mers.

From 11 to 13 of September,  poets from the main land and poets from the island wandered on the island Skylge/Terschelling. They did so in five groups, four of them in good hands of an island poet. That Saturday evening, the poets performed together and presented their results of Waailân to the public.

The performace of Ilse Vos, Simon Oosting and  Jolanda Gooiker has been made into an online presentation. RIXT will publish more of these in the coming weeks.  Below you can listen to the first contribution, in Frisian/Dutch.

The Poet of the Month October is Anne Heegstra.
You can read the Frisian poems on RIXT and an English translation of one poem will be published here.

At Neetltje, RIXT poets Christa Niklewicz en Geart Tigchelaar perfomerd twice. They did so in company of musician and poet Lukas Graff. Tigchelaar read from his coming poetry volume, Ommers. Niklewicz read and sang poetry of hers. Graff accompanied both poets on his piano, and also read own poetry.

In the weekend of September 11 to 13, poets of Frisian poet pack and island poets met on the island Skylge/Terschelling, at the folk high school Skylgeralân.

There, they met and formed groups of two or three to explore the island and their poetry together. During the exchange, the creativity and inspiration were endless, because of the good company and the beautiful surroundings.

On Saturday evening, under a starry night in the amphitheatre de Rûnte, at the folk high school, the poets read their work made during the day. Poems were written collectively or indivually, but always inspired by the good company.

The poets performed in their respective groups.

The first to read were Ilse Vos, Jolanda Gooiker en Simon Oosting, with a relay of the day.

The second performance was that of André Looijenga, Ina Schroders-Zeeders, and Simen de Jong.

Last but not least was the closure with “Skylge” made by poets Syds Wiersma, Ruud Knier, and Yva Hokwerda.

On Sunday, it was time to leave the island again for the RIXT poets, though we hope to  meet each other again, and poetry of the weekend will be published in due time. 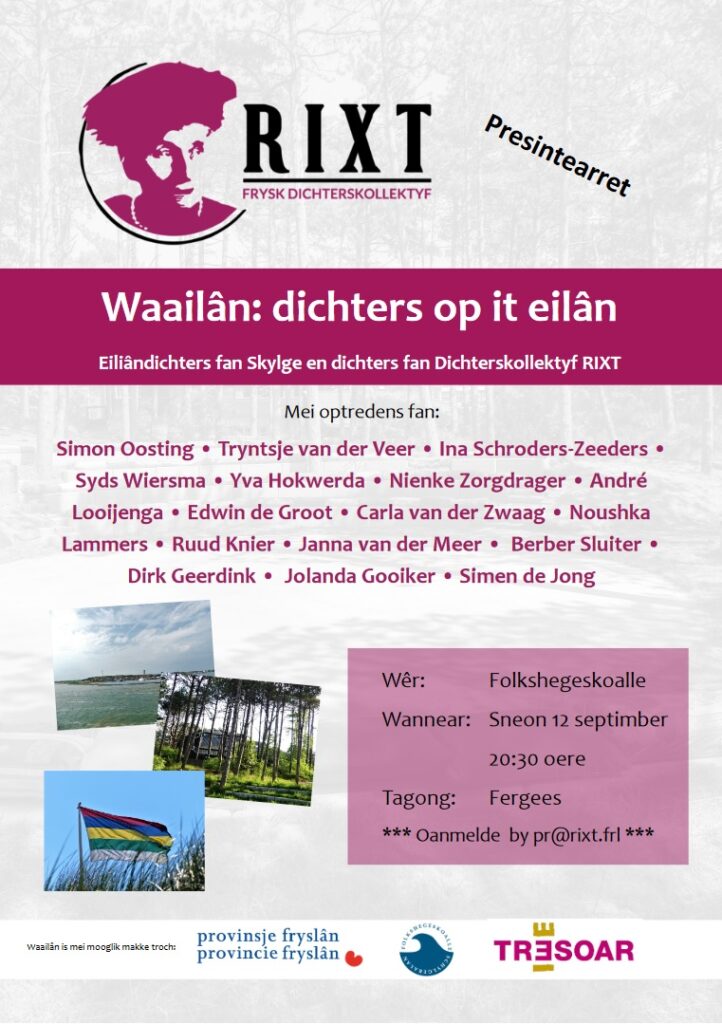 From the 1st of August to the 7th, the Frisian Poets Pack RIXT convened at the Writer’s Ark of Rink van der Velde near the village of De Feanhoop. Every day a duo came here to work on a new verse for a collective poem.

The poet of the month, Cornelis van der Wal, had the honour of writing the first verse, and started the poem with the line ‘The lake doesn’t take the storm’ from the novel De nacht fan Belse madam by Rink van der Velde. This Line of Rink thus set the tone and direction for the poem and the week itself.

The regional broadcaster Omrop Fryslân called in every day to hear that day’s new verse. Thus, listeners of the afternoon radio programs ‘De middei fan Fryslân’, ‘Sneon yn Fryslân’ and ‘Snein yn Fryslân’ were able to follow the evolution of the poem. The week was capped off with a performance of the complete poem in the former haunt of Rink van der Velde – Café Marktzicht in Drachten – on the 8th of August.

The participating poets were:

Watch the video for the poem ‘The Storm’ and an insight of the week at the Ark.

Translation by Trevor Scarse
Video made by Geart Tigchelaar