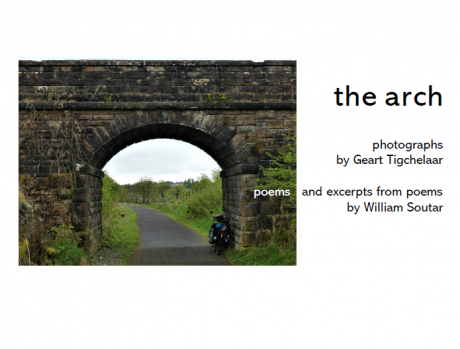 This year in March poet Geart Tigchelaar cycled from Fryslân to the Soutar Festival of Words in Perth, where he had a reading with Scots poet David Eyre about the relation between Frisian and Scots on the basis of Tigchelaar his work. Eyre is currently working on a translation of Tigchelaar his debut collection of poetry leech hert yn nij jek [empty heart in new jacket] (Hispel 2016) to Scots.
Tigchelaar had an anthology of Soutars poems in his pannier. The poet also packed his camera, so he gave himself the assignment to make a photograph each day, which suited a poem or a fragment of a poem and posted them on the social media. The organisation from StAnza Festival in St Andrews (where Tigchelaar has performed in 2018) really liked the initiative and bundled the photos and poems in an e-book.

Tigchelaar has also written a poem, inspired by the life and work of William Soutar, which was translated by Eyre in Scots and published here.