As a result of the international festival for literature in Kenya (Kistrech) in 2018, Sytse Jansma established contacts with several Norwegian and Swedish poets.

In April 2019, a weekend was organized in Oslo, where six poets from these countries gathered. Gigs were organized, discussions were held with magazine publishers, discussion evenings were held, and further networks were expanded. All in all an interesting cultural exchange that will be continued, probably in Gothenburg, Sweden.

In Oslo there was also a performance in Cappelens Forslag, a bookshop in the city centre. On the photo the Dutch poet Frank Keizer reading his poetry. 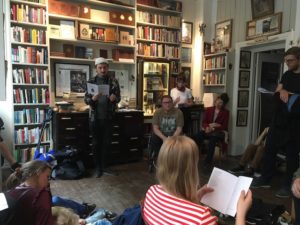